Home page Description:
Eight UHN scientists were named among the most influential in the world by Clarivate. 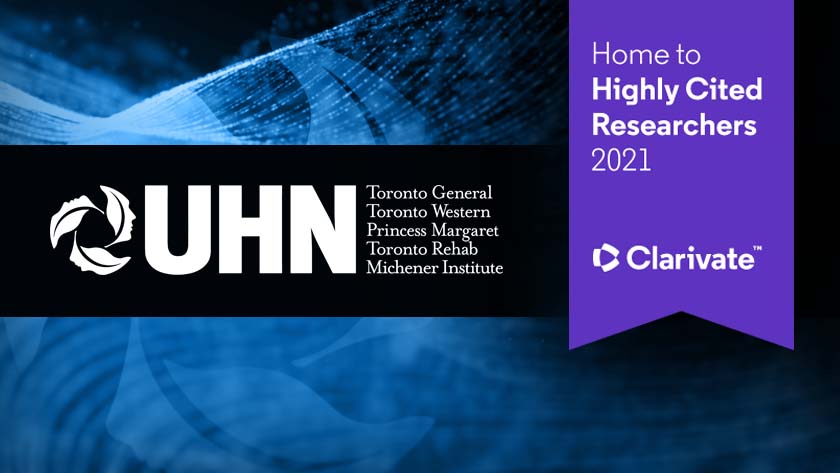 Eight world-class scientists and clinicians at the University Health Network (UHN) have been recognized in Clarivate’s list of Highly Cited Researchers for 2021.

Each year, Clarivate identifies the world’s most influential researchers. The ranking is determined by the number of highly cited papers—those within the top one percent by citations—that are published in a researcher’s field over the last decade.

The researchers on the list are one in a thousand: for every researcher that makes the list, there are 1,000 researchers that do not meet the threshold. Because of this, the selected researchers are truly exceptional at communicating their findings and have extraordinary impact in their field and peer communities.

Congratulations to the following UHN scientists who were included among 6,602 of the most impactful researchers in the world:

● Dr. Sidney H. Kennedy (Senior Scientist at the Krembil), a renowned researcher that is investigating treatments for major depressive and bipolar disorders

● Dr. Frances A. Shepherd (Senior Scientist at the Princess Margaret Cancer Centre), a renowned oncologist who conducts research on lung cancer and who is a leader in the design, development and conduct of clinical trials

*Note that this year, Drs. Lozano, Mak and Tsao were included in the Cross-Field category for excelling at interdisciplinary research and having impact in multiple areas of scientific discovery.

These researchers join 196 other Canadians who made the list. This total places Canada as the seventh top country in the world in terms of highly cited researchers, after Australia, Germany and the Netherlands.

David Pendlebury, Senior Citation Analyst at the Institute for Scientific Information at Clarivate said, “It is increasingly important for nations and institutions to recognize and support the exceptional researchers who are driving the expansion of the world’s knowledge. This list identifies and celebrates exceptional individual researchers at the University Health Network who are having a significant impact on the research community as evidenced by the rate at which their work is being cited by their peers. The research they have contributed is fueling the innovation, sustainability, health and security that is key for our society’s future.”

The methodology to determine the list of influential researchers draws on the data and analysis performed by bibliometric experts and data scientists at the Institute for Scientific Information at Clarivate. The full list, as well as a detailed explanation of the analysis methodology, is available here.