Home page Description:
Researchers find a set of markers to distinguish between early- and late-stage osteoarthritis. 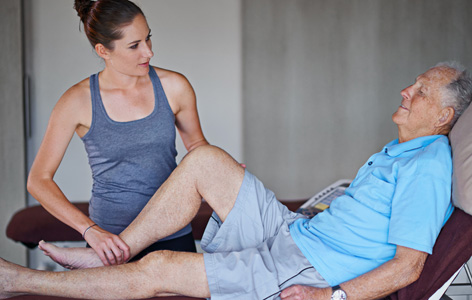 Image Caption:
Osteoarthritis affects approximately one in ten Canadians (The Arthritis Society). Exercise and physiotherapy can help alleviate the pain associated with the disease.

A joint is a connection between two bones. It contains cartilage and synovial fluid that act as a cushion and a lubricant, respectively, to protect bones from friction.

In osteoarthritis (OA), cartilage is destroyed and the composition of synovial fluid changes—causing joint stiffness, bone damage and pain. The disease progresses relatively unnoticed; by the time that it is diagnosed, the damage is often so severe that treatments are no longer effective.

Developing a molecular test that identifies early stages of OA could be used to predict damage before it happens, enabling earlier treatments. Small RNA molecules—called miRNAs—are found throughout the body and can turn on or off specific disease-related genes; therefore, they are often used in molecular tests as predictors of disease. A miRNA test that can distinguish between different stages of knee OA has not yet been developed.

Krembil Senior Scientist Dr. Mohit Kapoor initiated a study to address this issue. Dr. Yinghua Li from his team examined the levels of 752 different miRNAs in the synovial fluid of people with early-stage OA (those with little or no damage) or late-stage OA (those with moderate to severe damage). They found that the levels of seven miRNAs varied between the two stages, and that this set could be used to classify the stage of disease. Using complex computational models in collaboration with Dr. Igor Jurisica (Senior Scientist, Princess Margaret Cancer Centre), the team predicted that the set could collectively control two genes, RC3H1 and QKI.

“Our study is the first to report a set of miRNAs in the synovial fluid that can be used to distinguish between early- and late-stage knee OA,” says Dr. Kapoor. “Moreover, the roles of RC3H1 and QKI in knee OA are not known, representing new avenues of study on the path to finding effective new treatments for this chronic disease.”

This work was supported by the Arthritis Program at the University Health Network and the Toronto General &Western Hospital Foundation. I Jurisica is a Tier 1 Canada Research Chair in Integrative Cancer Informatics.