Home page Description:
The biomarker could help identify which treatments work best in patients with AML. 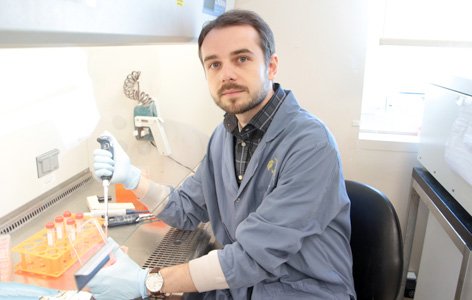 Image Caption:
PhD student Irakli Dzneladze is the lead author on the study, which was published in the Leukemia journal.

Acute myeloid leukemia (AML) is a type of blood cancer, characterized by the rapid growth of immature white blood cells that accumulate in the bone marrow and interfere with the production of normal blood cells. Unless treated, AML is associated with infection, organ failure, bleeding and death. In some cases, complete remission can be achieved with initial chemotherapy treatment but there is still a significant population of AML patients for which this does not occur. Despite many advances in understanding how AML develops and progresses, there is still a clear need to identify better predictors of therapy response and outcomes.

A recent study led by PM Cancer Centre Affiliate Scientist Dr. Leonardo Salmena and his team examined the association of INPP4B—an enzyme in an important signalling pathway that contributes to cancer development—with various clinical measures in AML. They observed that AML patients with high levels of expression of the INPP4B gene had poor response to initial chemotherapy and shorter overall survival. Moreover, when investigating its role in experimental AML cell lines, overexpression of the INPP4B gene enhanced cell proliferation and recapitulated the chemotherapy resistance observed in AML patients.

"The consistency of these results across several datasets suggests that INPP4B expression could be a robust biomarker for AML regardless of the planned therapy," says Irakli Dzneladze, lead author on the paper. "It may also be a promising target for future AML therapies."

This work was supported by the Leukemia and Lymphoma Society of Canada, and The Princess Margaret Cancer Foundation.