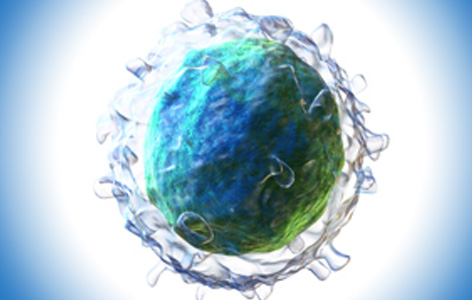 Image Caption:
The B cell (illustrated above) is an important part of the immune system, but can target the body's own tissues in diseases like lupus.

In the immune system, B cells are responsible for identifying invading viruses and bacteria and releasing antibodies that target these threats. In the autoimmune disease systemic lupus erythematosus, commonly known as lupus, B cells behave differently—they mis-identify healthy tissues and signal the immune system to attack. Why these cells target healthy tissue in lupus is still a mystery.

TWRI Senior Scientist Dr. Joan Wither and colleagues have helped shed light on this. The team showed that B cell behaviour changed over time and did not match up with the genetic risk factors of the patients, suggesting that another influence was at play.

In a key experiment, the research team placed B cells from healthy donors into blood plasma from someone with lupus, which caused the formerly healthy cells to behave just like those in lupus. These results indicated that something in the blood causes the change in B cell behaviour. Further tests demonstrated that this abnormal B cell behaviour was being influenced by a molecule known as interferon-alpha (IFN-α) that is normally increased in the body during an infection.

The identification of IFN-α as a key player in the disturbance of B cell behaviour in lupus represents an important first step towards the development of new therapies to restore normal B cell function.

This work was supported by the Canadian Institutes of Health Research, the Arthritis Society, the Arthritis Centre of Excellence, the Arthritis Research Foundation and the Toronto General & Western Hospital Foundation. PR Fortin is a Tier 1 Canada Research Chair in Systemic Autoimmune Rheumatic Diseases. Image courtesy of Blausen gallery 2014. Wikiversity Journal of Medicine. DOI:10.15347/wjm/2014.010