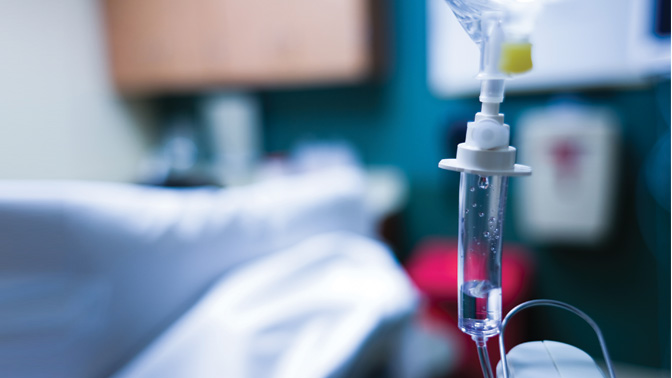 Image Caption:
Intravenous immunoglobulin treatments are prepared using plasma (liquid portion of the blood) that is typically pooled from thousands of individuals.
New research from the Princess Margaret Cancer Centre (PM) and the Canadian Blood Services has answered a longstanding scientific question by revealing why certain patients experience negative side effects after they receive a therapy that is meant to help them fight off infection and various autoimmune diseases.
The treatment—known as intravenous immunoglobulin (IVIg)—is usually prescribed to patients who are unable to produce certain proteins (antibodies) that are needed to fight infections. It is also given to patients with certain autoimmune diseases who have lost blood platelets, which are essential for preventing excessive bleeding. In other instances IVIg is administered to patients who have developed muscle and cognitive impairments as a result of a neurologic disorder. Most patients respond well to the therapy; however, a few develop serious side effects.
One common side effect is the destruction of healthy red blood cells—a process known as hemolysis. When it happens, hemolysis can lead to deadly drops in blood oxygen levels and serious organ damage. While researchers still do not know why this happens, it has been suggested that proteins in the IVIg initiate the process.
Explains Dr. Donald Branch, lead author of the study, “There are four major types of blood: A, B, AB and O. Each blood type is determined by the presence of specific sugars  on the surface of the red blood cells. Individuals with an A type have AA and AO markers; those with B have BB and BO markers; those with AB blood have A and B markers; and those with O type blood have neither A nor B markers.”
“We found that patients who were categorized as AB were at higher risk of IVIG-associated red blood cell destruction, while those with an O marker (AO, BO and O types) were protected.”
While these findings are preliminary, they suggest that, where possible, it would be prudent to closely monitor patients with an AB blood type for signs of red blood cell destruction.
This work was supported by the Canadian Blood Services, the Knut and Alice Wallenberg Foundation, the Swedish Research Council, Health Canada, the University Healthcare Region Skåne and The Princess Margaret Cancer Foundation.
Branch DR, Hellberg Å, Bruggeman CW, Storry JR, Sakac D, Blacquiere M, Tong TN, Burke-Murphy E, Binnington B, Parmar N, Sampson Riden L, Willie K, Armali C, Aziz J, Lieberman L, Laroche V, Callum J, Lin Y, Shehata N, Pavenski K, Lau W, Hannach B, Kuijpers TW, Olsson ML, Cserti-Gazdewich C, Pendergrast J. ABO Zygosity, but not Secretor or Fc Receptor Status, is a Significant Risk Factor for IVIG-Associated Hemolysis. Blood. 2018 Jan 5.