Eating Away at the Joint | UHN Research

Eating Away at the Joint 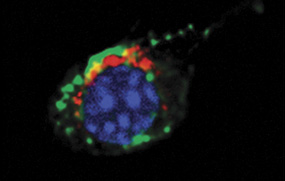 Osteoarthritis (OA) is characterized by the erosion of joint cartilage (the tough elastic material that protects the ends of bones). This damage is caused by inflammation, which can lead to joint stiffness and swelling that can be debilitating. The mechanisms responsible for joint inflammation and cartilage destruction in OA are not fully known; however, a recent study led by TWRI Scientist, Dr. Mohit Kapoor, has revealed one of the processes responsible.

Using an experimental model of OA, Dr. Kapoor and his team discovered that PPARγ—a factor that governs genes that respond to inflammation and joint destruction—is critical to keep the disease under control. PPARγ promoted autophagy, a self-protective process in which debris are recycled within cells. When PPARγ function was lost, joint inflammation and cartilage destruction increased—two effects that when combined accelerated the progression and severity of OA.

This study suggests that therapeutics capable of promoting PPARγ function may be effective for OA. These anti-inflammatory drugs, known as PPARγ agonists, are already approved for treating diseases like diabetes. As such, they represent an accessible option for improving the quality of life of people with OA.