Home page Description:
Moving discoveries from the lab toward the clinic. 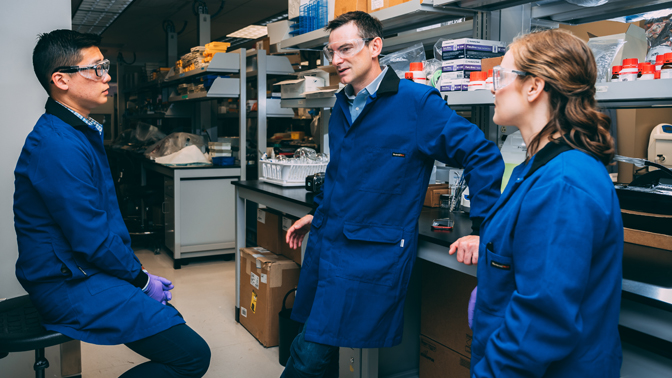 Image Caption:
Drs. Mark Reed (middle), Carla Brown (right) and Frank Lee (left) discussing a project in the lab.
Krembil researchers identify pathways and proteins that are important in arthritis, and diseases of the brain and eyes. Before these discoveries can be used to develop new drugs, they need to cross what many researchers have labelled the ‘valley of death’.
The valley of death refers to the period of time between a researcher making a fundamental discovery in the laboratory and a company deciding to invest millions of dollars into developing a new medicine based on the discovery. Most discoveries ‘die’ in the valley and do not lead to an effective drug.
To help more discoveries cross the valley of death, Krembil established a new facility—the Centre for Medicinal Chemistry and Drug Discovery (CMCDD). The facility is led by Dr. Mark Reed, a medicinal chemist with extensive experience in drug discovery and development.
“Turning a discovery into new medicine is a daunting task that requires a huge amount of time and energy. Most researchers do not have the bandwidth to do this alone. This is where CMCDD comes in,” says Dr. Reed. “We shepherd researchers’ discoveries through the earliest and most challenging stage of the drug discovery process.”
In October 2018, CMCDD achieved its first commercial success: Evotec AG and MaRS Innovation chose to support a drug discovery project led by Dr. Jeremy Sivak and CMCDD through their LAB150 partnership. This highly competitive investment was the second of its kind to be awarded in Canada. Dr. Sivak’s project aims to develop a treatment that will prevent glaucoma.
“This is just the beginning,” asserts Dr. Reed. “We have many other exciting projects in the pipeline targeting cancer, arthritis and neurodegenerative diseases.”
Teaching Trainees the Art of Drug Discovery
Medicinal chemists are at the heart of drug discovery. They design, build and refine the structure of chemical compounds so that the compounds have the desired medicinal effects in the body.
Despite the importance of medicinal chemistry in drug discovery, there is currently a shortage of medicinal chemists in Canada. This in turn is impeding the creation of new medicines based on Canadian discoveries.
Krembil’s CMCDD is helping to alleviate this shortage by training new graduates in the art and science of medicinal chemistry. In September 2018, CMCDD hired its first postdoctoral fellows—Drs. Carla Brown and Frank Lee—to support Dr. Sivak’s drug discovery project. 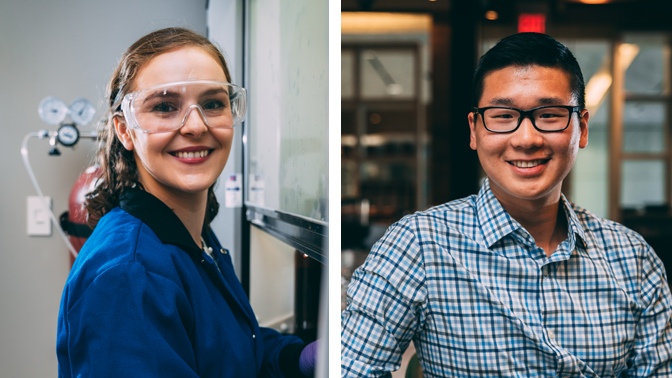