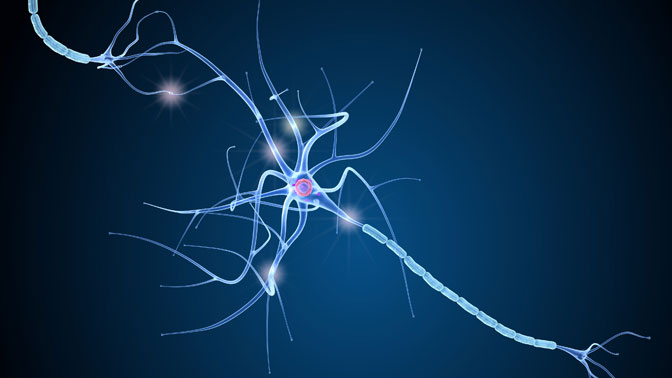 Image Caption:
Nerve fibres are covered by a fatty insulation layer called myelin. The formation of myelin associated with white matter begins in the second trimester and continues into adulthood.

Dr. Jeremie Lefebvre, Affiliate Scientist at Krembil Research Institute and Associate Professor of Biology at the University of Ottawa, recently used mathematical models to show that brain cells can adjust how fast they communicate with each other to increase their collective efficiency.

When we think, learn and remember, different parts of the brain must communicate with each other and work together to process, store and retrieve information. This communication takes the form of electrical signals, which are passed along bundles of nerve fibres in an extensive tissue network collectively known as white matter.

“Like electrical cables which have a layer of insulation on the outside, nerve fibres also have insulation around them,” says Dr. Lefebvre.

“And instead of remaining unchanged after the brain becomes developed, this insulation layer is increased within white matter to make communication between brain regions faster when needed, such as when we learn something new.”

Using available data on the conduction of brain signals in macaques and the anatomy of the human brain, Dr. Lefebvre and his colleagues constructed a mathematical model of the human brain’s communication network.

Analysis of the model showed that by enabling parts of the network to transmit signals faster—that is, by adding insulation to nerve fibres where and when needed—the brain’s internal communication network becomes more stable and more efficient.

“This adaptive insulation of nerve fibres makes the brain more resilient as well,” adds Dr. Lefebvre. “If a part of the network is damaged from trauma, the rest is able to compensate over time to help maintain stable communication between brain regions.”

Much of the physiology of these dynamic processes within the brain remains poorly understood. By using mathematical models, researchers can simplify the brain’s complexity and shed light on an aspect of its function. This study shows that the brain’s constant investment in its infrastructure plays a major role in how we learn and adapt to change.

This work was supported by the Natural Sciences and Engineering Research Council of Canada, the Canadian Institutes of Health Research and the Toronto General & Western Hospital Foundation. P Frankland holds a Tier 1 Canada Research Chair in Mental and Behavioural Disorders.