Home page Description:
Too little or too much dopamine could contribute to impaired movement in Parkinson disease. 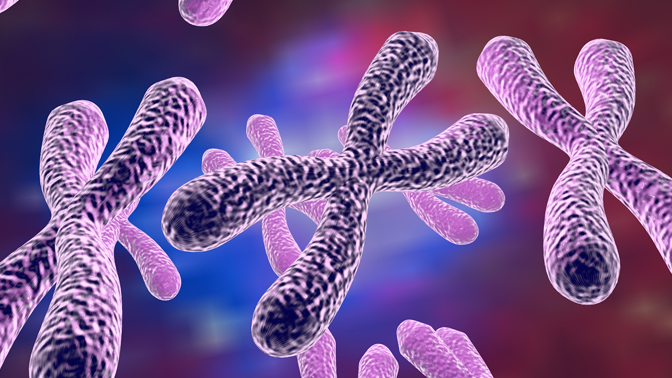 Image Caption:
22q11.2 deletion syndrome is caused by the loss of a specific region of chromosome 22. Chromosomes (pictured here) are molecules that carry genetic information.

We do it several times a day. We do it quickly. Some people even do it while crossing the street.

Texting is an everyday activity that we do effortlessly and take for granted. However, for a person affected by Parkinson disease (PD), it is challenging and can become impossible.

PD is a progressive neurological disorder characterized by slowed movements, tremors, stiff muscles and impaired balance. Its symptoms are caused by the gradual loss of brain cells, especially those producing the chemical dopamine, which is essential for producing smooth well-controlled movements.

In 2013, a team of researchers led by TGHRI Senior Scientist Dr. Anne Bassett found that PD occurs more frequently in people with 22q11.2 deletion syndrome than those without the syndrome. The syndrome is caused by a genetic alteration that can produce a wide variety of symptoms such as heart and palate abnormalities, learning disabilities, schizophrenia and seizures.

Continuing this thread of work, Dr. Bassett and her colleagues recently examined the signs and symptoms of PD in a group of adults with 22q11.2 deletion syndrome and in healthy participants.

“We speculate that too much dopamine, which may be harmful to brain cells, could increase the risk of developing not only PD, but also some of the mental illnesses that commonly occur in 22q11.2 deletion syndrome”, said Dr. Bassett of the findings.

This work demonstrates that studying 22q11.2 deletion syndrome can help to reveal the mechanisms underpinning PD and related movement disorders, as well as other complex brain diseases. Future research will shed light on these mechanisms by studying experimental models and patients over a longer period of time, starting before the appearance of PD symptoms and continuing to full-blown disease.

This work was supported by the Canadian Institutes of Health Research, Brain Canada, the National Commission for Scientific and Technological Research (Chile) and the Toronto General & Western Hospital Foundation. AS Bassett holds a Tier 1 Canada Research Chair in Schizophrenia Genetics and Genomic Disorders. AP Strafella holds a Tier 2 Canada Research Chair in Movement Disorders and Neuroimaging. AE Lang holds the Jack Clark Chair for Parkinson’s Disease Research and the Lily Safra Chair in Movement Disorders at the Toronto Western Hospital. AS Bassett holds the Dalglish Chair in 22q11.2 Deletion Syndrome at the Toronto General Hospital.