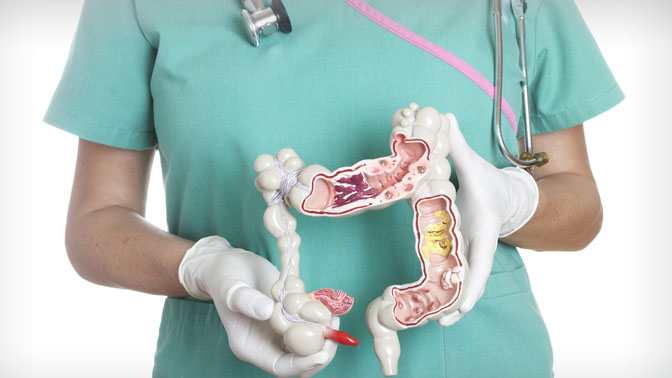 Image Caption:
Cancers of the gastrointestinal tract are among the most commonly diagnosed cancers. Understanding how these diseases develop will enable scientists to devise new treatments.

A study from UHN’s Princess Margaret Cancer Centre and The Hospital for Sick Children has revealed exciting new insights that link the development of the digestive system to cancer.

The digestive system, which includes the stomach, the intestines and the colon, begins to form three weeks after conception. The process depends on proteins known as transcription factors. These proteins turn specific genes on and off at carefully controlled times and at different locations in the body during development.

“While recent studies suggest that genes involved in the development of the digestive system are abnormally expressed in some cancers, little is known about the role of related transcription factors in cancer,” says Dr. Hansen He, Senior Scientist at Princess Margaret Cancer Centre.

To address this, the researchers examined gene expression during development of the digestive system. Their analyses uncovered a set of transcription factors—Sox2, Sox9 and Cdx2—that were critical for the development of the stomach and the intestines.

“By comparing the expression of over 20,000 genes during development with those expressed in cancers, we found that cancers that express high levels of Sox2, Sox9 and Cdx2 also expressed genes involved in gastrointestinal organ development. This suggests that organ-specific programs used during development are being reactivated in cancers,” says Dr. Tae-Hee Kim, Scientist at The Hospital for Sick Children.

Using experimental models, the researchers found that Sox2 and Sox9 play similar roles in cancer. While deletion of only one of these genes was not sufficient to prevent cancer initiation, deletion of both did reduce cancer severity.

“Understanding how these molecules guide the development of organs of the digestive system may provide new insights about mechanisms that lead to the initiation and progression of cancers,” says Dr. He.

This work was supported by the SickKids Foundation, the Cancer Research Society, the University of Toronto’s Medicine by Design Initiative, the Natural Sciences and Engineering Research Council, the Canadian Institutes of Health Research, the Ontario Ministry of Research, Innovation and Science, and The Princess Margaret Cancer Foundation.