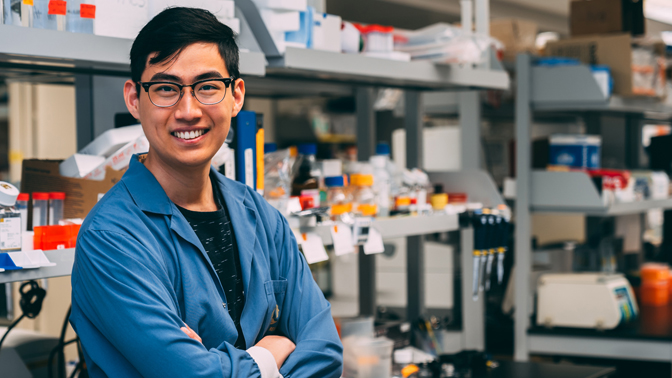 Image Caption:
Samuel Tsai in Dr. Wallace’s lab at the Krembil Discovery Tower.
A high-definition TV promises a superior visual experience. To fulfill this promise, the TV must be properly connected to a cable or satellite receiver. Otherwise, no image will appear.
In a similar way, the eye cells that initiate vision—known as photoreceptors—must make the right connections within the eye for a person to see. However, the mechanisms that control the maturation of photoreceptors and their ability to form these connections are unclear.
Dr. Valerie Wallace and her team have developed an efficient and inexpensive method to identify and study these mechanisms.
The researchers isolated eye cells from an experimental model and then seeded the cells in a dish. They then assessed the effect of adding or removing different factors—such as genes or proteins—on the ability of photoreceptors to establish connections with the other cells in the dish.
This method could help researchers develop new treatments for vision loss, such as cell replacement therapy. This emerging therapy involves the surgical transplantation of healthy photoreceptors from a donor into a host, replacing the lost or dysfunctional photoreceptors.
To date, all attempts to restore vision using cell replacement therapy have failed because the transplanted photoreceptors do not establish functional connections with host cells.
“Our method could reveal factors that promote the connections needed for cell replacement therapy to succeed,” states Dr. Wallace.
The Power of Team Work
Research projects often require diverse expertise and experience, combined with long hours of careful work. Many different people contribute, including researchers, trainees, technicians and other support staff. This was certainly the case for Dr. Wallace’s study.
While Dr. Wallace supervised the research, several of her trainees and staff developed and tested the method described in the accompanying story.
Samuel Tsai, the first author of the study, performed the majority of the work, which formed the basis of his Master’s thesis.
Other trainees who made important contributions include postdoctoral fellow Dr. Arturo Ortin-Martinez and graduate students Akshay Gurdita and Nicole Yan.
Tsai ELS, et al. Stem Cells. 2019 Apr;37(4):529-541. Supported by Brain Canada, the Foundation Fighting Blindness, the Ontario Institute for Regenerative Medicine, the Krembil Foundation, the Canada First Research Excellence Fund and the Toronto General & Western Hospital Foundation. MS Shoichet holds a Tier I Canada Research Chair (CRC) in Tissue Engineering. VA Wallace holds a Tier I CRC in Retina Regeneration. 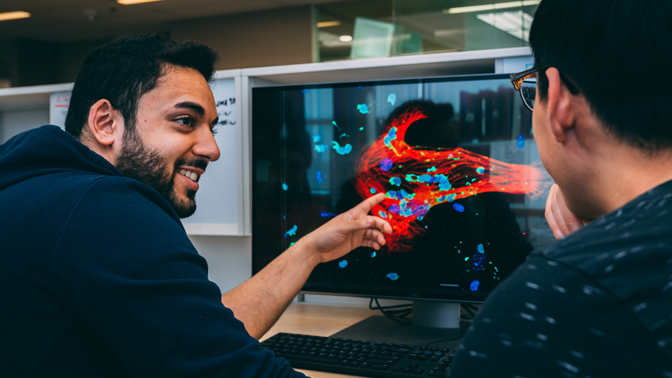 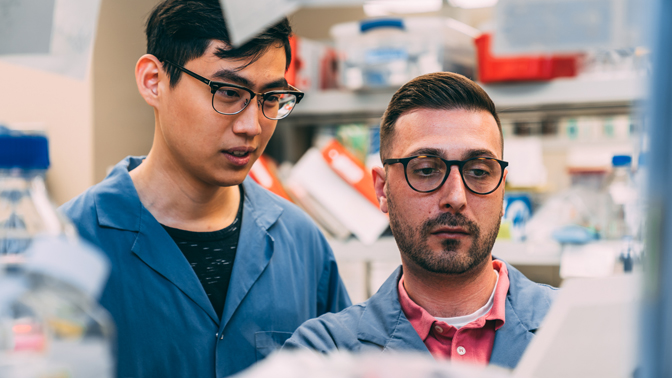