Your Heart on Cardiac Rehabilitation 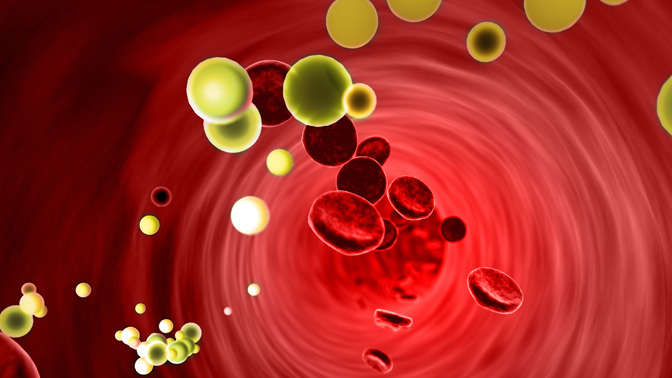 Image Caption:
The wide array of fat (lipid) molecules found in the blood (illustrated above in yellow) include triglycerides, cholesterol and phospholipids—the levels of these vary widely between different people and according to diet and lifestyle habits.

Blood tests to measure 'bad’ cholesterol are common and used to identify the risk of a heart attack. Now researchers are exploring whether other types of fat molecules (ie, lipids) found in the blood can provide new insight into heart health.

One of the researchers advancing this field is Dr. Krista Lanctôt, an Affiliate Scientist at KITE at University Health Network and Senior Scientist at Sunnybrook Health Sciences Centre.

Dr. Lanctôt led a recent study that showed that blood levels of a type of lipid known as sphingolipids could serve as a readout of improvements in fitness in patients undergoing cardiac rehabilitation.

“Cardiac rehabilitation is an important way to improve the health of patients with coronary artery disease. However, patients’ responses to these programs can be highly variable, which is why we explored whether we could identify a new, more objective way to gauge cardiac fitness in this these patients,” explains Dr. Lanctôt. “We focused on sphingolipids because levels of these lipids were recently shown to be elevated in elderly individuals with poor cardiopulmonary fitness.”

The study enrolled 100 patients with a history of coronary artery disease who were participating in a six-month cardiac rehabilitation program. In these patients, the researchers measured blood levels of 45 different sphingolipids, as well as cardiopulmonary fitness at the beginning of the program and then again at three and six months.

Cardiopulmonary fitness, which is a readout of how well the body uses oxygen during vigorous and sustained workout, was measured using a ‘stress test’ where participants wear a mask to measure oxygen levels while rigorously exercising.

“Our results revealed that blood levels of five key sphingolipids decrease as cardiopulmonary fitness improves during cardiac rehabilitation,” said Dr. Lanctôt. “The findings, while emphasizing the importance of lifestyle changes to improve heart health, also provide detailed data that will inform future studies on the role that sphingolipids play in cardiovascular health.”