Home page Description:
Brain injuries from assault may require more time off than those from accidental injuries. 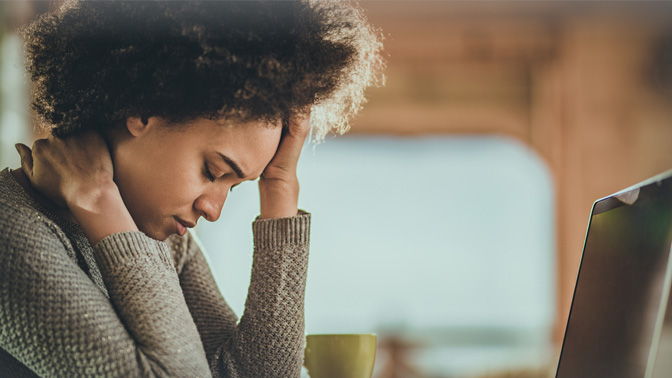 Image Caption:
Mild traumatic brain injuries can lead to symptoms that interfere with work, such as headaches or trouble focusing, and some of these symptoms can last for months.

According to a new study from the Toronto Rehabilitation Institute, how an injury happens can be an important factor in how quickly a person returns to work. Led by KITE Senior Scientist Dr. Angela Colantonio, the study revealed that, versus accidental brain injuries, those that resulted from assault led to more time being taken off from work. The findings are particularly important given that these workers had sustained a “mild” traumatic brain injury, which is often termed an “invisible” injury and can be easily dismissed in the workplace.

Dr. Colantonio’s team examined data for Australian workers compiled by the Institute for Safety, Compensation and Recovery Research. The data included 3219 work-related mild traumatic brain injury compensation claim records. When assault was the cause of mild brain injury (which was the case for 9% of the records), workers were more than twice as likely to take days off than when the cause was not related to an assault.

Assault was more common in some service-related industries, such as health care and public administration, though that may be a result of better reporting practices and workplace cultures with zero tolerance for violence.

The research team examined results by gender, but did not see significant differences regarding the likelihood of taking time off after assault. Limitations in the scope of the data used in this study may have led to this conclusion. Dr. Colantonio adds that, “it is important for future prospective and qualitative studies to explore the dynamic of gender in order to more fully advance our understanding of how assault affects time away from work.

“Prevention strategies and provisions to support the return to work and overall well-being should be considered by employers, especially for those whose injuries were the result of assault,” concludes Dr. Colantonio.

This work was supported by the Canadian Institutes of Health Research (Institute of Gender and Health) and the Toronto Rehab Foundation. Dr. Colantonio is the Director of the Rehabilitation Sciences Institute and Professor of Occupational Science and Occupational Therapy at the University of Toronto. Dr. Shafi is an alumna of the Rehabilitation Sciences Institute and currently a Postdoctoral Fellow at UHN.