Help from Above | UHN Research 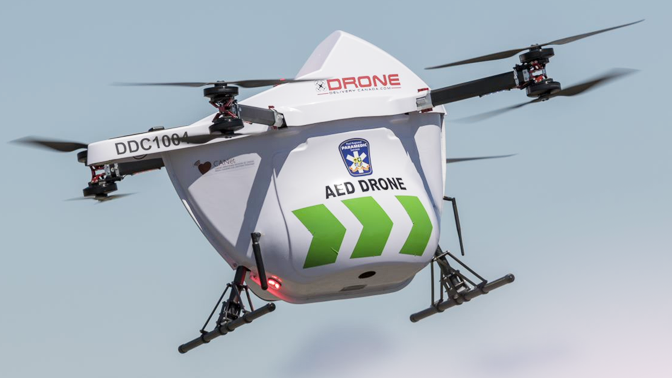 Image Caption:
Drones could deliver life-saving automatic emergency defibrillators to the scene of a heart attack, beating an ambulance to the scene by several minutes on average. Image courtesy Drone Delivery Canada.

The use of drones to deliver of goods and services is getting closer to reality every day. In health care, drones could be used to rapidly deliver life-saving automatic external defibrillators (AED) to people experiencing cardiac arrest.

Techna Affiliate Scientist Dr. Timothy Chan used historical Ontario data, which showed when and where cardiac arrests had occurred, to reveal that there are substantial benefits to using drones to deliver AEDs.

AEDs are available at many public venues, such as subway stations, stadiums and universities, but are less likely to be available close to someone suffering cardiac arrest in residential and rural settings. Drones could deliver an AED in these cases; however, there are trade-offs. It would be a waste of resources to send a drone in response to a 911 call if an ambulance arrived sooner.

To address these issues, a research team led by Dr. Chan developed a machine learning-based system to decide when to optimally dispatch a drone. The team tested different decision-making approaches using a simulation based on data from Peel region between 2015 and 2019.

A simple rule—to always send a drone—would have improved response times by approximately two to three minutes, suggesting that there is strong potential for improving patient outcomes in residential settings like Peel. Each minute gained could improve the odds of survival by 10% based on a common rule of thumb.

The machine learning optimized rules were able to achieve nearly identical improvements in response time, while dispatching 30% fewer drones. The advanced decision-making approach could help municipalities implement drone-delivered AEDs to save lives, at a reduced cost compared to sending them in response to every call.

“The high accuracy of our dispatch rules is bolstered by the fact that even when an incorrect decision was made, the time difference it would have taken an ambulance to arrive was relatively small,” Dr. Chan says of the results. “For a drone-delivered AED initiative to succeed, other barriers must be overcome. The concept requires community buy-in: not just the acceptance of drones flying through the area, but the acceptance of delivered AEDs. This would require targeted education and social marketing campaigns. The logistics of operating and maintaining a drone network must also be developed,” he concludes.

This work was supported by the Cardiac Arrhythmia Network of Canada and Zoll Medical Corporation. TY Chan holds a Tier 2 Canada Research Chair in Novel Optimization and Analytics in Health. A conflict-of-interest was declared in this study for Dr. Cheskes, who received funding from Zoll Medical and sits on the Advisory Board of Drone Delivery Canada.