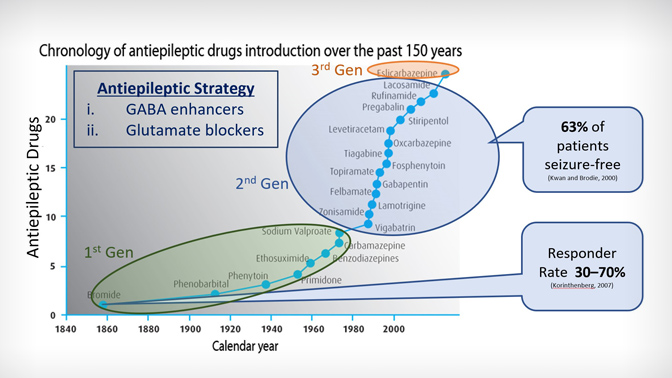 Image Caption:
Figure 1. Chronology of antiepileptic drug introduction over the past 150 years; adapted from Brodie and Sills, 2011.

Epilepsy is a common neurological disorder that affects 1% of the world’s population. The disorder is as old as humanity itself: nearly 3000 years ago, the Ancient Babylonians had already documented the many types of seizures that exist onto clay tablets1. It was only relatively recently a British neurologist, John Hughlings Jackson, correctly theorized that seizures are manifestations of sudden and excessive electrical activity in the brain2. Accordingly, the symptoms of seizure events were thus dependent on where the electrical activity occurred in the brain. Jackson’s insight led to the revolutionary idea that certain areas of the brain correspond to different sensory-motor functions and consciousness.

Later, Jackson’s work inspired the famed Canadian-American neurosurgeon, Wilder Graves Penfield, to develop a ground-breaking surgical technique involving electrostimulation on the exposed cortex. This approach was used to locate the brain tissue responsible for generating the behavioural features observed during seizure onset. Once identified, the affected brain tissue was removed in order to prevent future seizures3. Penfield’s pursuit to locate the area responsible for seizure onset using electrical stimulation on the cortex ultimately allowed him to develop a comprehensive physical map of the human brain that corresponded to different sensory-motor functions4,5. Notably, Penfield also discovered physical locations in the brain that stored memories and regulated streams of consciousness. The collective works by Jackson and Penfield sparked tremendous advancements in humanity’s understanding of how the human brain functions and inspired contemporary ideas in philosophy, psychology and neuroscience.

To this day, Jackson’s work provides the rationale for using antiseizure drugs that either increase inhibitory activity or decrease excitatory activity in the brain. These pharmaceutical strategies have been successful in treating two-thirds of epilepsy patients6. However, since the very first antiseizure drug was prescribed over 150 years ago, there have been few improvements in efficacy despite the development of several iterations and generations of antiseizure drugs (Figure 1). Furthermore, paradoxical new findings demonstrate that brief inhibitory activity can trigger electrographic seizure activity in the brain under certain conditions7. These findings, although counterintuitive, are expected when considering the brain is non-linear8 and is composed of nearly 100 billion cells connected in 100 trillion ways.

Such realizations make it clear that, in order to help all epilepsy patients, new treatment strategies are needed. Current epilepsy research now focuses on the non-linear dynamical nature of the brain to understand how the brain transitions into the seizure state. The CenteR for Advancing Neurological Innovation to Application (CRANIA) at UHN is actively investigating how transitions into the seizure state occur and how to prevent these transitions using electrical stimulations. These initiatives bring hope to the one-third of patients (~20 million people) who currently fail to respond to available medication. In addition to helping patients, this renaissance in epilepsy research is beginning to uncover new insights into the human brain—such as neural events underlying perception, cognition and consciousness—that will lead to a deeper understanding of the human brain.