Critical Nature of the Brain 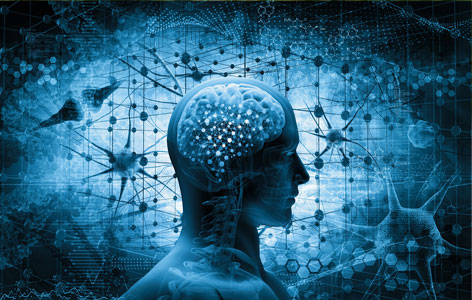 The human brain is arguably the most complex system known in the universe: 100 billion neurons with 200 trillion different connections. From this complex structure, arises consciousness, the capability to perceive the natural world, and ability to experience emotions. Regrettably, the brain’s complexity also makes it prone to neurological disorders. As modern medicine is keeping people alive for longer and the risk of developing these disorders increases with age1, the frequency of neurological disorders are poised to reach epidemic levels. For this reason, there are intense research efforts underway to address the timeless question of how the brain functions so that we may better develop cures for neurological diseases like Alzheimer's, autism, and epilepsy. Interestingly, recent research reveals that the brain may operate no differently than other complex systems such as avalanches, earthquakes and traffic jams. The unifying framework that connects all of these seemingly distinct phenomena is known as criticality2.

In some complex systems where there are two distinct states: ordered and disordered states. Criticality is the general term used to describe the behavior of the system at a transition point between these two states. The unique behaviors of complex systems at transition points are governed by the underlying agents and connections that give rise to criticality. For example, water is comprised of H2O molecules that are connected to each other through polar covalent bonds. Water can exist as a liquid or vapour, depending on the temperature. The transition point between liquid and vapour is 100°C; because there are no intermediates between water and vapour, it is referred to as a discontinuous phase transition. In contrast, the brain is comprised of neurons connected to each other by nerve fibers. The brain can be ordered (oscillating) or disordered (random), depending on the activity of neurons. Typically, neurons are in a harmonious balance between excitatory and inhibitory inputs. The brain, comprised of these neurons, consequently exists at a transition point between completely ordered and disordered states. However, at this critical point, the brain can manifest in an infinite number of intermediate states; because of this, it is referred to as a continuous phase transition3. Some neuroscientists hypothesize that this criticality is what allows the brain to process large amounts of information because only small amounts of input (incoming stimuli) are required to create tremendous amounts of activity in the brain4. What remains open for debate are the underlying neurobiological mechanisms responsible for the emergent property of criticality.

If scientists can create biologically inspired models that can recapitulate such critical state transitions, then it is possible to study how departures from this state could be prevented. Developing more accurate models of the brain will also allow modern computing techniques to simulate what kinds of neuromodulatory activity will promote the brain to remain in its normal/critical state5. Furthermore, identifying neurobiological mechanisms underlying departures from criticality may guide new therapeutic strategies for treating brain disorders. These efforts will be pursued at UHN with newly funded initiatives set to officially launch next month, stay tuned!