University Health Network (UHN) is a research hospital affiliated with the University of Toronto and a member of the Toronto Academic Health Science Network. The scope of research and complexity of cases at UHN have made it a national and international source for discovery, education and patient care. 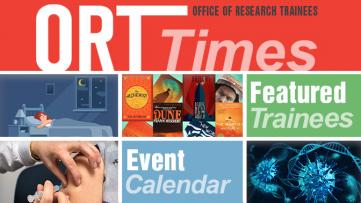 The UHN Office of Research Trainees (ORT) is proud to announce the release of the latest issue of The ORT Times!

The ORT Times is UHN's monthly trainee-focused newsletter. It highlights news and editorials about trainee life, articles to help developing researchers get the most out of their training experience at UHN, tips on career development, and research training opportunities within and outside of UHN.

Featured Trainees: Alaa Youssef from Toronto Western Hospital and the Wilson Centre and Raabeae Aryan from KITE/Toronto Rehabilitation Institute are featured this month!

To see past issues of The ORT Times, please visit ORT’s website. 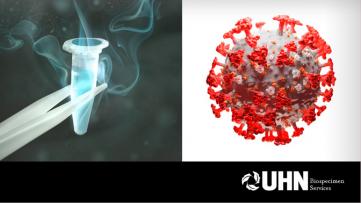 Sometimes victory requires keeping your enemies close by. UHN Biospecimen Services and leading researchers have established the UHN COVID-19 Biobank to do just that.

UHN’s COVID-19 Biobank was born from the launch of the clinical trial known as the Pandemic Response Biobank for Coronavirus Samples, or PRESERVE, lead by Dr. Shahid Husain. UHN Biospecimen Services securely processes, stores, and manages biological specimens and accompanying clinical data, and represents a key resource for basic and clinical research at UHN.

Since the trial launched on May 5, 2020, over 292 participants have donated over 10,000 specimens to the COVID-19 Biobank. These specimens will be housed indefinitely for future research studies and quality improvement and include blood, blood components, urine, saliva and nasal swabs.

Dr. Husain says, “The UHN COVID-19 Biobank will help us to understand key aspects of COVID-19, including, how to detect, prevent, manage and treat disease.”

Many COVID-19 research projects are underway at UHN. These projects are focused on a variety of topics, such as the development of new COVID-19 tests and diagnostics, therapeutic interventions and ways to curb the spread of the disease.

Heidi Wagner, the Head of Operations of UHN Biospecimen Services, comments, “The UHN COVID-19 Biobank represents a key resource. One that will enable researchers and clinicians to better understand the virus, the immune response to the virus and to develop effective and life-saving countermeasures.”

If you have questions about the UHN COVID-19 Biobank or would like to collaborate, please contact Heidi Wagner at Heidi.Wagner@uhn.ca. 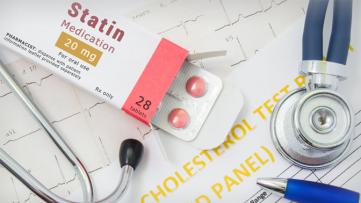 Cholesterol-lowering drugs may be effective for treating certain types of multiple myeloma.

Cholesterol-lowering drugs may be effective for treating certain types of multiple myeloma.
close

Using a drug approved for one disease to treat another disease is often referred to as ‘drug repositioning’. This is a common strategy in cancer treatment, and studies have revealed that drugs prescribed for ailments such as type 2 diabetes, high cholesterol and infections may be effective against certain cancers.

“Statins have been shown to induce cancer cell death in many tumour types, but it is difficult to predict which types of cancers will respond to statin treatment,” says Dr. Penn.

Multiple myeloma is a cancer that originates in white blood cells called plasma cells. Some forms of the disease—those associated with worse prognoses—are characterized by a genetic change, referred to as t(4;14).

Using an experimental model of this cancer subtype, the researchers found a potential weakness: when exposed to statins, which block the production of cholesterol, t(4;14)-positive cancer cells died. Next, the research team found that statins, when combined with standard treatment, further improved the ability to kill cancer cells.

Preclinical and clinical studies are needed to test whether statins can help treat this aggressive subtype of cancer in patients. Regarding these next steps, Dr. Penn says, “Because statins have already been shown to be safe for use in humans, future trials can be fast tracked. By identifying statin sensitivity in this cancer subtype, our work could lead to effective and low cost treatments.”


Image Caption: Statins are a class of drugs that lower cholesterol levels in the blood by blocking the enzyme required for its production. 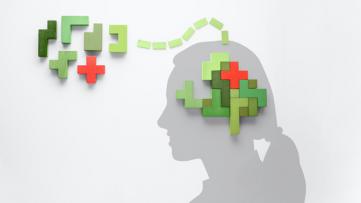 Tracing the Paths to Disease

Tracing the Paths to Disease

Progressive supranuclear palsy (PSP) is a rare brain disorder with no known cure. As it worsens, the disease can cause serious problems with walking, balance, eye movements, swallowing, as well as changes in mood and thinking.

A recent large-scale international study led by Krembil Senior Scientist Dr. Gabor Kovacs identified the underlying stages of disease, which are key to better managing symptoms and developing targets for therapy. “This is the first study that attempts to define stages of PSP,” says Dr. Kovacs. “By knowing where to look, we can better monitor patients and better predict prognoses.”

The research project included international collaborators, including Dr. John Trojanowski from the University of Pennsylvania and Dr. Günter Höglinger from the German Centre for Neurodegenerative Disease. Together, the research team evaluated more than 200 brains affected by PSP and defined six stages of disease progression.

An abnormal protein, known as the pathological tau protein, is seen in the brains of individuals with PSP. The researchers traced how this protein spreads through the brain in distinct paths for each clinical sub-type. The findings showed that irrespective of the disease’s clinical sub-type the first stage of PSP develops in the same brain region.

“Knowing where the pathological accumulation of the tau protein starts in the brain, means that we can now focus on researching this area specifically,” says Dr. Kovacs. “Because this region comprises unique cell populations with different receptors or metabolic activity—we will get a better idea of which brain cells to target with therapy in the early stages of PSP.”

The study was also able to show that the major difference between clinical sub-types of PSP relates not only to the involvement of nerve cells but also to the supporting cells called astroglia and oligodendroglia.

“We’ve provided a conceptual framework for the spread of tau to understand the mechanisms of how pathological tau jumps from one neuron to the next neuron and how the supporting tissue plays a role,” says Dr. Kovacs. “With this understanding, we hope to provide a foundation for basic research to develop blocking agents or therapies to stop the spread of the tau protein.”

Dr. Kovacs is Co-Director of the Rossy Program for PSP research, which is led by Dr. Anthony Lang, Director of the Movement Disorders Clinic at Toronto Western Hospital. Funding for the study was obtained by Dr. Lang. Under the directorship of Dr. Lang and a team of world-leading researchers in movement disorders, it is the only program in Canada dedicated to PSP research and care. The research was also supported by Open Access funding from Projekt DEAL, the National Institutes of Health, the Penn Institute on Aging, Fundació Marató de TV3, the Rossy Foundation, the Edmond J. Safra Foundation, the Bishop Dr. Karl Golser Foundation, the German Research Foundation (DFG), the German Federal Ministry of Education and Research (BMBF), the NOMIS Foundation and the Toronto General & Western Hospital Foundation.


Image Caption: The current study maps the regions of the brain where pathological tau proteins arise in individuals with various sub-types of progressive supranuclear palsy. These sub-types include Richardson syndrome and Parkinsonism. 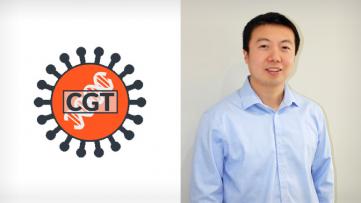 The genetic material found within a virus is essential for its ability to replicate and spread. Understanding how this genetic material changes as the virus spreads is crucial to developing drug treatments and vaccines.

A research team led by Techna Institute Scientist Dr. Bo Wang has designed an innovative application that can track the changes that occur to the genetics of the SARS-CoV-2 virus as it spreads.

“Mutations in the virus could affect how well a vaccine or treatment works,” says Dr. Wang. “We needed a tool to monitor these changes—similar to how we have other tools for tracking infection cases.”

Developed by Dr. Wang’s doctoral student Hassaan Maan, the new web application, named the COVID-19 Genotyping Tool (CGT), summarizes and analyzes data from around the world. Genetic sequences are pulled from a global repository and compared based on their similarity. Researchers can sort the data by country, continent, collection date and travel history to see if the virus is evolving in time or by geographic region.

The CGT can also be used to directly compare in-house data against globally sourced data. Artificial intelligence algorithms let researchers situate their local data within the global picture in a matter of minutes.

In addition to helping keep a close eye on the virus, analysis from the CGT will help uncover the transmission history of the virus. Patterns in genetic variations will help identify outbreak epicentres and key transmission events. This information can then be used to guide public health policy decisions and efforts toward managing the pandemic.

This work was supported by the Vector Institute for Artificial Intelligence, Sunnybrook Health Sciences Centre, McMaster University, the Public Health Agency of Canada, the University of Manitoba, the CIFAR AI Chairs Program and the generous support of donors. 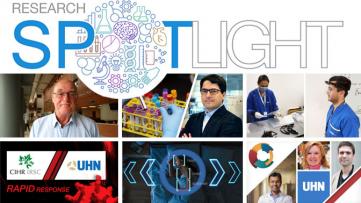 Welcome to the latest issue of Research Spotlight.

As Canada’s largest research hospital, UHN is a national and international source for discovery, education and patient care. This newsletter highlights top research advancements across UHN and from over 1000 researchers appointed at our institutes.

Stories in this month’s issue:
● COVID-19 and the Brain: Brain imaging in severe cases of COVID-19 reveals that the virus may cause microbleeding.
● Designed, Made and Tested Here: UHN fast-tracks on-site manufacturing of face shields, test swabs and ventilator components.
● A Fresh Pair of Eyes: Computer vision can accurately differentiate between sleep apneas and inform treatments.
● Searching the Blood for Cancer: Ground-breaking findings set the stage for blood tests to diagnose brain and kidney cancers. 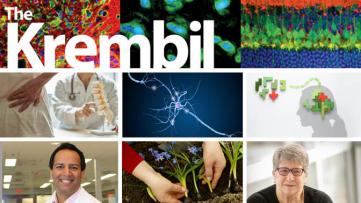 Learn about the latest news and research advancements from the Krembil Research Institute.

Learn about the latest news and research advancements from the Krembil Research Institute.
close

Welcome to the latest issue of The Krembil.

Stories in this month’s issue include:

Learn more about our institutes by clicking below: