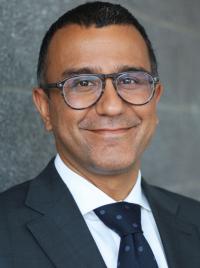 Dr. Kalia received his BSc at McGill University and his MD and PhD degrees from the University of Toronto. In 2006 he entered the neurosurgery residency program at University of Toronto, during which he completed a postdoctoral research fellowship at the Massachusetts General Hospital Institute for Neurodegenerative Disease at Harvard University. After obtaining his FRCS(C) in neurosurgery, he undertook subspecialty training in stereotactic and functional neurosurgery at the Toronto Western Hospital.

His team is actively working on developing novel biological therapies that are designed to slow or halt the progression of neurodegeneration in PD.
Parkinson’s disease (PD) is a disabling movement disorder that affects between 1-3% of the Canadian population over the age of 65. Poor handling and elimination of misfolded proteins has been identified as central in the molecular pathogenesis of PD. A special class of proteins within the cell called “chaperones” is responsible for refolding misfolded or damaged proteins. If the chaperone system cannot adequately deal with these misfolded proteins, they are targeted to specialized disposal systems in the cell including the ubiquitin-proteasome system and the autophagy-lysosomal system. Together these pathways are critical to maintain protein quality control within a cell. If they are dysfunctional or overwhelmed then neurodegeneration ensues.

Our current work is aimed at:
1)      Understanding how chaperone molecules fail to maintain adequate protein quality control in PD and other neurodegenerative disorders;
2)      Dissecting molecular pathways that contribute to aberrant protein disposal via the proteasome and lysosomal systems in PD; and,
3)      Developing innovative methods to target and regulate these protein quality control pathways in PD and other neurodegenerative disorders.

Our ultimate goal is to find ways to mitigate the loss of neurons in the brain to be able to slow or even halt the progression of PD and other neurodegenerative disorders.

For a list of Dr. Kalia's publications, please visit PubMed, Scopus or ORCID.