Women in Research: Then and Now | UHN Research

Women in Research: Then and Now 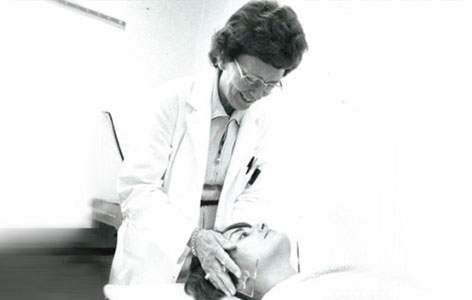 Hodgkin’s lymphoma, a cancer of white blood cells called lymphocytes, was considered a universally fatal disease in the first half of the 20th century. It wasn’t until 1950 when Dr. Vera Peters, one of the first female professors at the University of Toronto, published a seminal report on the efficacy of radiation therapy to treat Hodgkin’s lymphoma1. The late researcher, who was based at the Toronto General Hospital, is celebrated for her remarkable achievements in radiation oncology, breast cancer treatment and being one of the first internationally recognized female researchers.

Dr. Peters lived during a time when medical research was almost entirely dominated by males. An anthropological study found that American high school girls found science as “an inappropriate career form of work for themselves".2 Indeed, a career in science would potentially separate them from their husbands and families; early marriage and early parenthood were part of the main values of life.2

Unfortunately, this pattern of gender inequity in the medical and research fields persists today. According to a 2010 study by the Natural Sciences and Engineering Research Council of Canada that used data from 1999 to 2009, only 30% of all PhD graduates in the natural sciences and engineering streams were female, and only 12.2% of women were full professors.3 The study also concluded that women tend to occupy lower tier positions compared to their male peers.3

The movement for gender equality in the workplace is a recent phenomenon and is slowly making an impact in the research field. Today, advocacy groups such as the Society for Canadian Women in Science and Technology are encouraging more girls and women to pursue careers in the natural sciences and engineering. The Government of Canada announced in their 2018 Federal Budget their plan to invest over $200 million over five years to include more female researchers in the Canada Research Chairs Program4. Moreover, one of the federal government’s political objectives is to close the gap in “gender inequity pay through proactive legislation”.5

UHN is making its own progress in representing more female researchers over time. The proportion of female researchers increased by nearly 10% between 2007 and 2017--a huge leap from Dr. Peters’ time.6 At UHN, you can find female scientists investigating tissue regeneration; the reasons why multiple sclerosis affects more women than men; the consequences of chronic disease on a person’s life and relationships; and of course, which cancer therapy would be most effective at treating a particular cancer type.

3. The Corporate Planning and Policy Directorate, Natural Sciences and Engineering Research Council of Canada. (2010). Women in science and engineering in Canada. Retrieved from http://www.nserc-crsng.gc.ca/_doc/Reports-Rapports/Women_Science_Enginee...