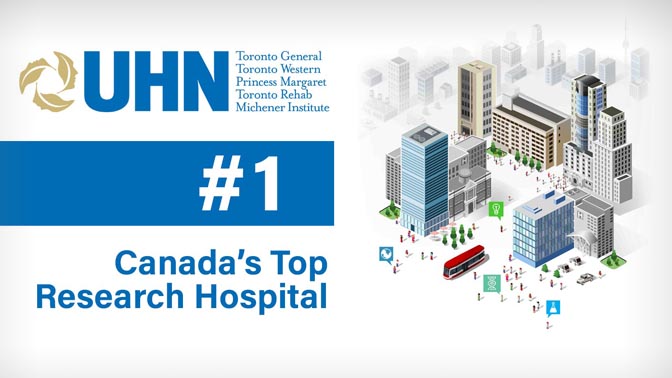 For the ninth year in a row, UHN is number one on RE$EARCH Infosource Inc.’s list of Canada’s Top 40 Research Hospitals. The list of research hospitals in the country has been compiled annually since 2011.

In the last fiscal year, UHN spent $362.8 million on research activities—representing 3.6% more than the previous year and approximately 17.5% of its total hospital spending. The Hospital for Sick Children and Hamilton Health Sciences were in second and third place, with expenditures of $246.6 million and $195.8 million, respectively.

“We are proud to once again top this annual ranking of top Canadian research hospitals,” says Dr. Brad Wouters, Executive Vice President, Science and Research at UHN. “Our position is a testament to the world-class research that is done here and our unique ability to examine all facets of human health and disease, including foundational discovery, translational, clinical and health services research. Thanks to the University of Toronto, our collaborators, our sponsors, our foundations—The Princess Margaret Cancer Foundation, the Toronto General & Western Hospital Foundation and the Toronto Rehab Foundation—and all of our other partners for their continued support of our research mission.”

UHN also ranked third in researcher intensity—defined as the ratio of research expenditures to number of researchers—in the ‘large’ tier of hospitals.

RE$EARCH Infosource Inc. is a leading research, consulting and publishing firm that specializes in the areas of policy, research, business intelligence and analysis on science, technology, innovation and the Canadian R&D ecosystem. The firm also publishes an annual ranking of Canada’s Top 50 Research Universities, on which the University of Toronto (UHN’s affiliated university) is ranked first.