A Partnership to Make New Medicines 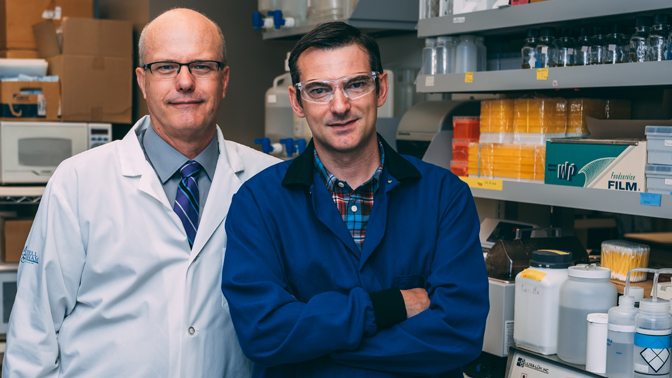 Image Caption:
Dr. James Eubanks (left) and Dr. Mark Reed (right) are partnering with the Toronto Innovation Acceleration Partners to develop a new treatment for Rett syndrome.
The Toronto Innovation Acceleration Partners (TIAP), formerly known as MaRS Innovation, are collaborating with Krembil Senior Scientist Dr. James Eubanks to develop a new treatment for Rett syndrome, a rare developmental disorder found almost exclusively in girls and women.
Infants with Rett syndrome develop and grow normally until the age of 8 to 12 months when symptoms begin appearing. Although the symptoms vary in type and severity, most of the girls and women with the disorder cannot speak or use their hands purposefully. Many also experience seizures that are difficult to control with medications. Presently, there is no cure for Rett syndrome, and the available treatments can only help alleviate symptoms.
Researchers have known for many years that most cases of Rett syndrome are caused by mutations in the MECP2 gene; however, the mechanisms that link these genetic changes to the syndrome’s diverse symptoms are not well understood.
“We believe that we have discovered an important piece of the puzzle,” says Dr. Eubanks, who has been studying the disorder for over 20 years.
Using experimental models, Dr. Eubanks and his team have shown that MECP2 mutations lead to abnormally high levels of the TRPM2 protein in the brain, which interfere with normal brain development and function. Although this mechanism is likely to be only one of several contributing to the disorder and its symptoms, the researchers have accumulated compelling evidence that it is an important contributor and represents a promising therapeutic target for Rett syndrome.
TIAP will initially invest up to $400,000 to help translate Dr. Eubanks’ discovery into a new treatment for Rett syndrome. The funds will support the creation and evaluation of drug-like compounds that target TRPM2, dampening its activity, in the brain of Rett patients. Dr. Mark Reed, a medicinal chemist and head of Krembil’s Centre for Medicinal Chemistry and Drug Discovery, will oversee the work, which will be split between the Centre and the Charles River Discovery site in the United Kingdom. The new partnership will also give Drs. Eubanks and Reed access to TIAP commercialization services to support further development of any promising treatments.
“This is a unique and exciting opportunity to really help patients by developing a treatment that is more effective than what is currently available to them,” says Dr. Eubanks.
Source: https://www.globenewswire.com/news-release/2019/07/15/1882478/0/en/MaRS-Innovation-Launches-New-Drug-Discovery-Program-Targeting-Rare-and-Disabling-Developmental-Disorder.html