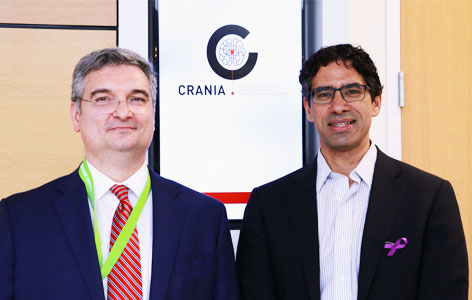 Imagine: computer chips that are implanted in the brain to prevent memory loss, help stabilize mood and even stop an epileptic seizure. The Center for Advancing Neurological Innovation to Application—CRANIATM—ventures to turn these ideas of science fiction into a reality. As mentioned in last month’s article, CRANIA is the new initiative led by University Health Network (UHN) in partnership with the University of Toronto (UofT) to develop new neuromodulatory treatment strategies for neurological disorders. CRANIA’s bold pursuit to build implantable computers that can communicate with our brain inspires new ambitions and tremendous support. It has already received over $20 million in initial funding from the Canadian Foundation for Innovation, the Ontario Research Fund, the Walter and Maria Schroeder Foundation and various other vendors as in-kind contributions.

The internal UHN launch of CRANIA took place on May 15, 2018 at the BMO Education & Conference Centre in the Krembil Discovery Tower. At the event, the co-founders of CRANIA, Professor Milos Popovic and Dr. Taufik Valiante, revealed their blueprint for accelerating the transition of new neuromodulatory technology into the clinic for treating patients. They both recognized the great potential of neuromodulation strategies for treating neurological disorders. Moreover, they recognized that the extraordinary talent pool required to develop these neuromodulatory devices is right here in Toronto.

In recent years, Toronto has attracted top STEM talent from around the globe due to its consistent ranking among the world’s top five most livable city and UofT’s ranking among the world’s top 25 universities. In addition, tuition fees will be significantly reduced for most international PhD students at UofT beginning this fall. As Toronto continues to draw upon world-class talent and cultivate a relentless entrepreneurial spirit through incubators like MaRS, The Creative Destruction Lab, Ryerson Zones, and many others, the ecosystem created by CRANIA will help Toronto become a major hub for developing neuromodulation: Firstly, CRANIA will manage state-of-the-art facilities within the Krembil Neuroscience Centre and Krembil Research Institute; facilities will be made accessible to members of CRANIA for creating novel clinical workflows and designing neuromodulatory hardware. Secondly, CRANIA will operate an academic arm at UofT’s Faculty of Applied Science & Engineering, called the CRANIA Neuromodulation Institute, to train the next generation of engineers, scientists and clinicians to advance neuromodulation. Lastly, CRANIA will develop incubator programs to accelerate the commercialization of neuromodulation technologies for clinical use in patients.

Neuromodulatory strategies have a tremendous potential to effectively treat the neurological disorders that affect nearly one in six of the world’s population. If the vision of CRANIA is realized, the commercial production of therapeutic neuromodulation devices may be the best thing to come out of Toronto since insulin. 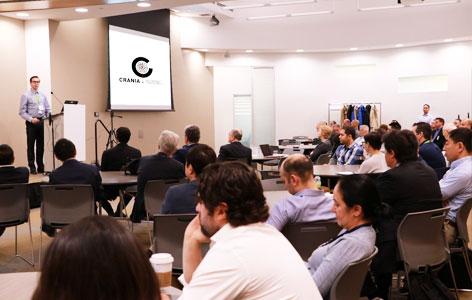 Attendees at the internal launch of CRANIA. 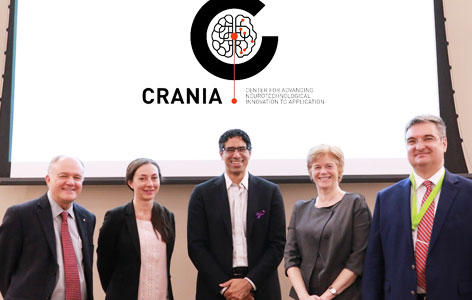 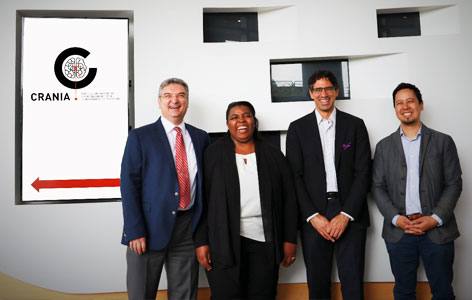