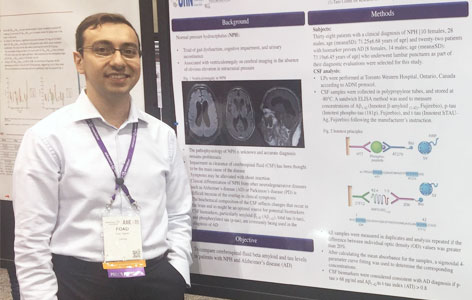 Conference Highlight: This conference highlighted significant progress in developing affordable and accessible biomarkers for detecting different types of dementias at the early stages.

Conference Summary: At this year’s meeting, several groups presented their results on using novel biomarkers (e.g., tau and neurofilament) from blood, cerebrospinal fluid (CSF), and other peripheral fluids and tissues for detecting different types of dementias at the early stages. One of the most interesting developments was presented by Dr. K.R. Wildsmith who investigated which phosphorylation site correlates best with PET tau tracer, a measure of tau burden, in patients with Alzheimer’s disease (AD). In this study, CSF samples from 38 individuals were analyzed, paired phosphorylated and unphosphorylated peptides at four sites (i.e. T181, S202, T205, and T217) were measured. The results showed that phosphorylated T217 and T205 CSF tau were more correlated with the brain tau burden measured by tau PET compared to T181 CSF tau which is currently being used to diagnose AD. In conclusion, this study suggested that tau phosphorylation at sites other than T181 may be more sensitive biomarkers to reflect tauopathy.

Another presentation that caught my attention was by Dr. F. Baldacci, who explored the temporal dynamics of plasma neurofilament light chain (NFL) levels in individuals with subjective memory complaints stratified by Aβ deposition. Cross-sectional data from 316 participants and longitudinal data from 79 participants revealed that baseline plasma NFL correlated with tau in the entire population and in the amyloid PET negative subset. In addition, the authors showed that the baseline plasma tau was associated with plasma NFL increases over time. The study suggests that tau pathology may drive plasma NFL increase over time.

Overall, this year’s conference showcased some great presentations and demonstrated how far this area of research has grown over the past few years.