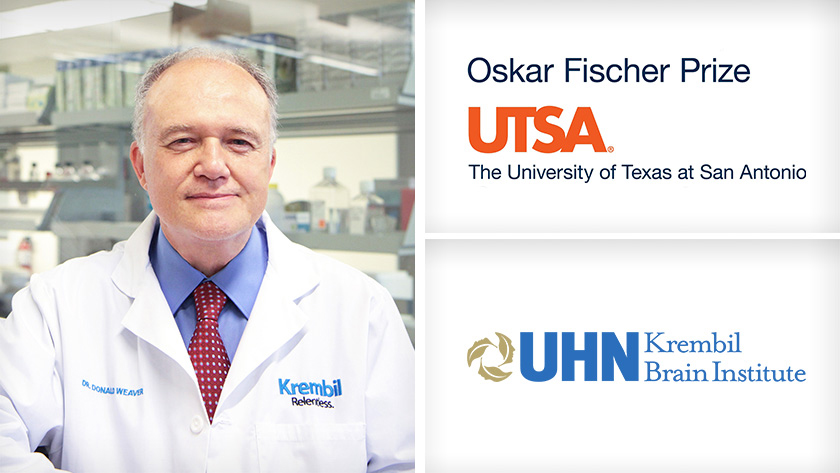 Congratulations to Dr. Donald Weaver, one of ten recipients of the 2022 Oskar Fischer Prize.

The award is provided annually by The University of Texas at San Antonio (UTSA) Colleges of Sciences to recognize the world’s brightest minds in Alzheimer disease research—those who are exploring innovative ideas about the causes of the disease to guide new research and treatments.

Dr. Weaver was named one of two silver-level awardees for his theory of Alzheimer disease as an autoimmune disorder.

The new theory proposed by Dr. Weaver brings together studies in systems biology, molecular modelling, biochemistry and neuroscience, to devise a comprehensive mechanistic model that suggests that Alzheimer disease is a disorder of innate immunity regulated by amino acid metabolic pathways. His research supporting this theory includes a recent publication in the journal Alzheimer’s Association, entitled ‘Alzheimer's disease as an autoimmune disorder of innate immunity endogenously modulated by tryptophan metabolites’.

“We now believe that beta-amyloid gets confused and can't tell the difference between bacteria and a brain cell. And so it accidentally attacks our own brain cells. This then becomes what we call an autoimmune disease.”

Dr. Weaver is the first Canadian scientist to receive the Oskar Fischer Prize. He will be presented the award later this month in San Antonio, Texas.

More about The Oskar Fischer Prize

Ten individuals were selected to receive gold, silver and bronze prizes for their papers that synthesize the breadth of Alzheimer disease research to-date. Winners were selected by an interdisciplinary committee of advisors and announced on June 8, 2022. These winners brought forth 10 distinct, innovative ideas that look beyond the prevailing theories of Alzheimer disease and could direct future research and treatments. Some of the categories that emerged include autophagy, lysosome and mitochondria; Apolipoprotein E and excitation; neural stem cells; and the immune system. Learn more about this year’s award recipients and their winning explanations on the UTSA award website.