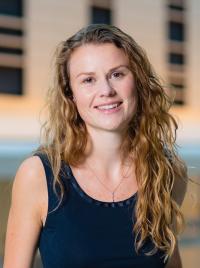 Dr. Stephanie Protze obtained her Bachelor of Science degree in 2007 from the Dresden University of Technology (Germany), in the Molecular Biotechnology program. She joined the International Max Planck Research School in the laboratory of Drs. Ursula Ravens and Elly Tanaka and graduated with a PhD in Cell Biology and Biomedicine from the University of Dresden in 2012. For her Postdoctoral Fellowship, Dr. Protze trained in the laboratory of Dr. Gordon Keller at the McEwen Centre for Regenerative Medicine at the University Health Network. In August 2018, Dr. Protze joined UHN as a Scientist and started her independent research group.

My research focuses on heart development and on advancing new regenerative therapies to treat cardiovascular disease. I am particularly interested in pacemaker cells and the electric conduction system that regulate the heartbeat. Failure of the hearts conduction system results in life threatening, irregular or slow heartbeat and requires implantation of an electronic pacemaker device. Approximately 14,000 Canadians receive an electronic pacemaker every year, a number that is steadily increasing with an aging population. While representing an effective treatment electronic pacemakers have a number of disadvantages including the need for recurrent battery replacement, risk of lead infections, lack of communicating with the autonomous nervous system and lack of adaption to growth in paediatric patients. Stem cell-derived biological pacemakers could overcome these disadvantages and represent an attractive future therapy.

My lab is using developmental biology based approaches to establish strategies for the differentiation of human pluripotent stem cells into cell types of the cardiac conduction system including sinoatrial node and atrioventricular node pacemaker cells. By using pluripotent stem cells as a developmental model system we obtain new insights into human heart development in these projects.
We are also establishing new in vitro models for conduction system diseases, such as congenital heart block by applying our ability to generate the different cardiac cell types to patient-derived induced pluripotent stem cells. These studies aim at exploring disease mechanisms and identifying potential drug treatment targets.
In order to test the ability of stem cell-derived pacemaker populations to function as biological pacemakers and regenerate the conduction system of the heart we are employing in vitro and in vivo assays including multielectrode arrays and small and large pre-clinical animal models.

For a list of Dr. Protze's publications, please visit PubMed or Scopus.