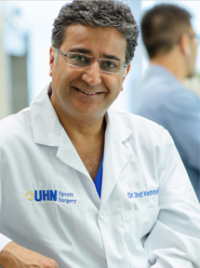 https://orcid.org/0000-0003-4547-8094
Keywords: lung transplantation, lung injury, IL-10, ischemia-reperfusion injury, gene therapy, lung preservation
Thoracic Surgery Research Laboratory: Lung Injury and Gene Therapy in Lung Transplantation
There are two major areas which limit the successful application of lung transplantation namely, ischemia reperfusion injury and bronchiolitis obliterans. Our work deals with the exploration of the underlying mechanisms of both of these injuries and the development of therapeutic strategies to prevent or reverse them.

Our major project is gene therapy in lung transplantation. We are working on techniques to genetically modify the donor lung so that it is better able to deal with the stress imposed upon it by the transplantation process. We hope to address both ischemia reperfusion injury and obliterative bronchiolitis with gene therapeutic techniques.

To this end, we have shown that immunosuppression related to transplantation leads to augmented and prolonged expression of the transgene.

The immune response to the transfected adenoviral gene has been a major limitation and our work has demonstrated that gene therapy has a very high likelihood of success in the setting of transplantation were some of the limitations can be overcome by the immunosuppression.

In fact, we have also demonstrated that immunosuppression of transplantation can allow effective re-transfection of the recipient without a significant immune response. We have also shown that the optimal time of delivery of the gene of interest would be to the donor under conditions of norothermia, prior to extraction and cold storage of the organ for transportation and transplantation.

In addressing obliterative bronchiolitis in a rat tracheal transplant model of fibrous airway obliteration related to transplantation, we have shown that adenoviral IL-10 gene transfection can prevent the development of bronchiolitis obliterans. This is the first demonstration of a gene therapeutic strategy to treat this devastating condition which effects over 50% of lung transplant patients.

For a list of Dr. Keshavjee's publications, please visit PubMed, Scopus or ORCID.