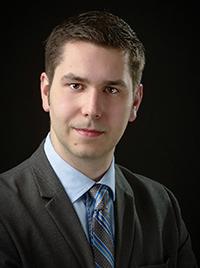 Dr. Brian Ballios obtained both his Doctor of Medicine (MD) and Doctor of Philosophy (PhD) at the University of Toronto in the combined MD/PhD program.  His doctoral work focused on new approaches to the transplantation of stem cells and their progeny for the treatment of retinal degeneration.  With a background in material science and Engineering Chemistry (Queen’s University), Dr. Ballios developed the first injectable hydrogel-based delivery system for transplanting stem cells into the retina.  After completing his FRCSC in Ophthalmology at the University of Toronto, he undertook a subspecialty clinical fellowship in Inherited Retinal Disease at Massachusetts Eye and Ear and Harvard University.

Dr. Ballios joined the Krembil Research Institute at UHN in 2021, and is also a Clinician-Scientist in the Donald K. Johnson Eye Institute.  He holds appointment as Assistant Professor in the Department of Ophthalmology and Vision Sciences at the University of Toronto, and is the J. Ardeth Hill – Fighting Blindness Canada Professor in Ocular Genetics.  He holds clinical staff appointments at the UHN and the Kensington Vision and Research Centre (KVRC).  He holds peer-reviewed funding from Fighting Blindness Canada (FBC), and the Foundation Fighting Blindness (FFB) U.S., and has previously been supported by the BrightFocus Foundation, the Retina Foundation of Canada, and the VitreoRetinal Surgery Foundation.

Retinal degenerative diseases are disabling conditions affecting the vision of a significant number of Canadians.  Acquired conditions, such as age-related macular degeneration (AMD) or diabetic retinopathy, are the leading causes of irreversible blindness in senior and working-age adults, respectively.  The prevalence of these conditions is on the rise.  For example, AMD currently affects more than 2 million Canadians (6.5%) over the age of 50, and is the leading cause of irreversible blindness.  With our aging population, the prevalence of AMD is expected to increase by 97% in the next thirty years.  Treatments are aimed at slowing the progression of vision loss, but do not represent a regenerative approach to retinal repair.  While less prevalent, inherited retinal disorders (IRDs) affect an estimated 90,000 Canadians, with a total cost of disease – including healthcare costs, productivity and well-being – at upwards of $6.7 billion.  IRDs include conditions such as retinitis pigmentosa, Stargardt disease, Leber congenital amaurosis, choroideremia, cone (and cone-rod) dystrophy, and achromatopsia.  More than 270 genes have been identified for inherited monogeneic retinal disease.  With rare exception, treatments do not exists for inherited conditions.

New therapies for retinal degeneration are focused on the next generation of regenerative medicines.  These include gene and cell-based therapeutics, including stem cells.  Several of these approaching are already being applied in clinical trials and therapies.  While gene therapy has the potential to correct the underlying mechanism of disease in monogeneic disorders, it depends on the presence of viable light-sensitive cells.  Stem cell therapy has the potential to replace the light-sensitive photoreceptors lost in later-stage disease, when patients have suffered significant vision loss.  Cell-based therapies hold promise for both IRDs and acquired conditions such as AMD.

Our laboratory and clinical work is focused on:

[3] Integrating new technologies, to enhance the performance of cell-based retinal therapies; and,

The overall goal of our work is to cure retinal blindness by discovering new therapies for inherited and acquired disease.

For a list of Dr. Ballios' publications, please visit PubMed or Scopus.