UHN Inventor of the Year 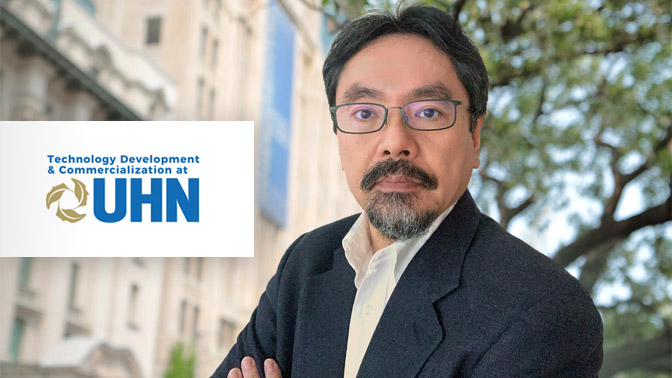 The Technology and Commercialization (TDC) office is thrilled to recognize Dr. Naoto Hirano, Senior Scientist at Princess Margaret Cancer Centre, as the winner of UHN’s 17th annual Inventor of the Year Award.

Dr. Naoto Hirano received the award for his work on developing the TCR-HLA multimer staining technique, which greatly expands how immunotherapy targets cancer, allowing more people to benefit from the treatment.

The TCR-HLA multimer staining technology is part of a branch of cancer immunotherapy known as T-cell receptor-based adoptive cellular therapy, which helps to stimulate the body’s own immune response to destroy cancer cells.

The approach devised by Dr. Hirano overcomes current immunotherapy targeting limitations that arise from using only a few types of human leukocyte antigens (HLA) during immunotherapy. HLAs are responsible for presenting antigenic peptides to the body in order to stimulate an immune response. The types of HLAs currently available are only found in a small subset of people and ethnic groups. Furthermore, only a select number of peptides, which are present in a fraction of the cancer cells, are used.

TCR-HLA multimer staining enables a wide variety of different types of HLAs and peptides to be used to target cancer. These can be customized to individual patients, greatly expanding the effectiveness and applicability of immunotherapies.

Dr. Hirano is also the scientific co-founder of TCRyption Inc., a UHN spin-off company that was recently launched to help advance T-cell immunotherapy using this groundbreaking technology. TCRyption Inc.’s commercialization efforts were led by UHN’s TDC, which secured an initial $10 million in seed financing to advance the innovation towards helping patients.

“We are thrilled to recognize the world-class science, collaboration and commercialization that Dr. Naoto Hirano exemplifies. It is exciting to see another UHN and Toronto ecosystem technology making bold strides towards improving health by including a broader spectrum of patients in need,” says Brad Wouters, Executive Vice President, Science and Research, UHN.

About the Inventor of the Year Award

The Inventor of the Year Award is an annual award recognizing UHN researchers who have demonstrated excellence in translating their findings into new technologies, services and products that improve health. These inventions, along with the many other cutting-edge research innovations made at UHN, demonstrate the world-class creativity and impact that UHN researchers are having on the global health care community.

Past Inventor of the Year winners include: