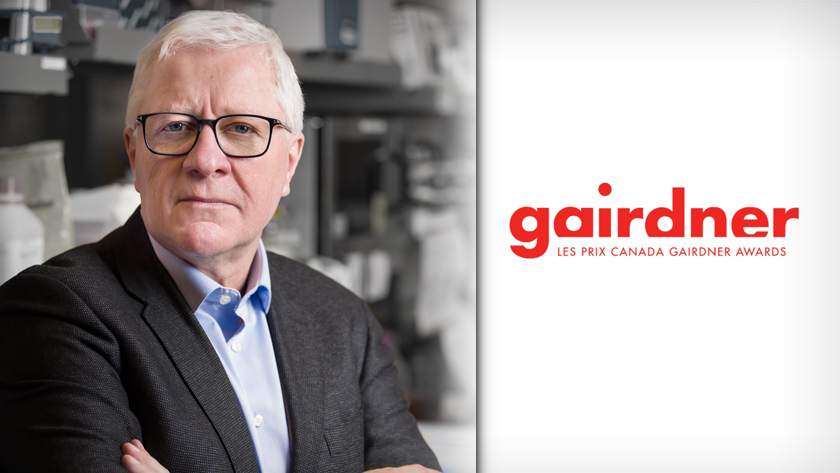 Image Caption:
Dr. Dick says that receiving the Gairdner International Award sends a strong message to Canadian scientists that we have the capacity, expertise and resources to do world-class research. (photo credit: Images by Delmar)

“It was a bit of a surprise, shock, really! It's a mix of humility, gratification and pride,” said Dr. Dick when he got the news from the Gairdner Foundation. “I'm proud of the fact that our work is being recognized; we've done something important and we’re carrying the mantle of Canada, representing our country.”

Dr. Dick’s Canada Gairdner International Award honours his seminal discovery of leukemic stem cells, as well as his detailed characterization of these cells—work that is changing the diagnosis and treatment of acute myeloid leukemia.

These findings shed light on why chemotherapy fails some patients as well as opening the door to new diagnostic, preventative and therapeutic strategies. For example, to help customize therapies to treat leukemia in individual patients, his team developed a ‘stemness score’. This score combines information from 17 genes that can be used clinically to determine a patient’s risk of having a poor outcome.

Click on the video above to hear Dr. Dick discuss his career, contributions, thoughts on mentorship and what it takes to advance science and cancer care.

Now, the efforts of cancer researchers around the world, including those of Dr. Dick and other research teams at the Princess Margaret Cancer Centre, are focused on unravelling the unique properties of individual cells in cancer. This work has revealed new strategies that cancer stem cells can use to survive cancer therapy, including becoming dormant, using stress signals and changing their metabolism.

“Dr. Dick's scientific contributions on the development of normal and cancerous blood cells continue to have a major impact on cancer research and treatment. This prestigious award reflects his status among the world’s elite in human cancer biology,” adds Dr. Wouters.

Listen to the Beyond the Breakthrough podcast 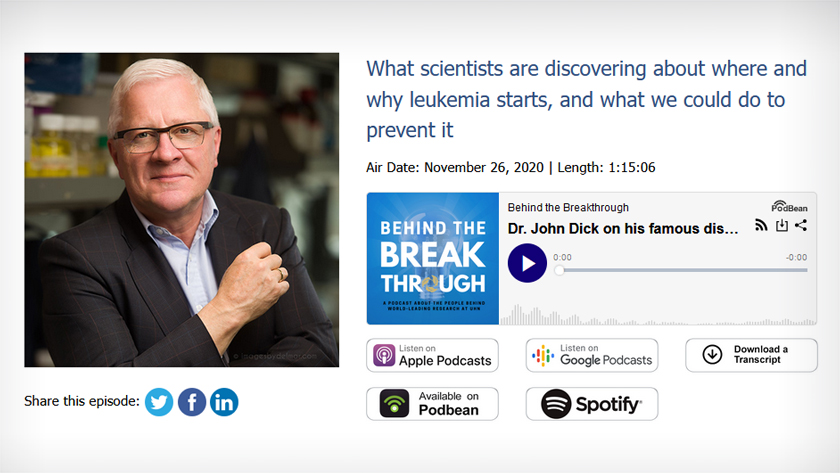 Listen to Dr. Dick discuss his pioneering LSC discovery, as well as his career path from a one-room schoolhouse in rural Manitoba to a leading medical researcher on the UHN’s Behind the Breakthrough podcast.

About the Gairdner award

Each of the five Canada Gairdner International Awards handed out each year comes with a $100,000 prize. Over 400 scientists have received an award since they were established in 1959 by the Gairdner Foundation and 96 of those awardees have gone on to receive a Nobel Prize. Read more about the awards and the other winners on the Gairdner Foundation website.

Dr. John Dick completed his undergraduate and graduate studies at the University of Manitoba, where he received his PhD in 1984. He undertook post-doctoral training at the then-named Ontario Cancer Institute in Toronto, which is now the Princess Margaret Cancer Centre (PM). He worked at the Research Institute of the Hospital for Sick Children from 1986 to 2001 before returning to PM, where he is currently a Senior Scientist and holds Tier 1 Canada Research Chair in Stem Cell Biology.

He has been internationally recognized through his election as a Foreign Member of the US National Academy of Medicine (2020) and to the Fellowship of the Royal Society of Canada (2004); the Royal Society of London, UK (2014); and the AACR Academy (2016). He has received numerous prestigious awards including the Dameshek Prize (2005), Thomas Prize (2009) and Mentor Award (2018) from the American Society of Hematology; the Clowes Memorial Award (2008) and AACR-Pezcoller Prize (2020) from American Association for Cancer Research; the Noble Prize (2000) and the Diamond Jubilee Award (2007) (with Drs. J.E. Till and E.A. McCulloch) from the National Cancer Institute of Canada; the Gold Leaf Prize for Discovery (2017) from the Canadian Institutes of Health Research; the Tobias Award (2017) and ISSCR Award for Innovation (2019) from The International Society for Stem Cell Research; and The KEIO Medical Science Prize (2017).

Some of the key articles outlining Dr. Dick’s discoveries and contributions include: