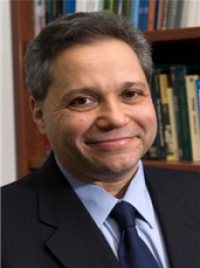 Keywords: global health, health innovation, vaccines
Peter A. Singer has dedicated the last decade to bringing science and innovation to tackle the health challenges of the world's poorest people. He is well known around the world for his creative solutions to some of the most pressing global health problems.

Dr. Singer is Foreign Secretary of the Canadian Academy of Health Sciences and chaired the Academy’s assessment on Canada’s Strategic Role in Global Health. In 2014, he was named Co-Chair of Every Woman Every Child’s Innovation Working Group, which is aimed at harnessing the power of innovation to accelerate progress towards achieving the health-related Millennium Development Goals. He has advised the Bill & Melinda Gates Foundation, the UN Secretary General's office, the Government of Canada, Pepsico, BioVeda China Venture Capital Fund, and several African Governments on global health.

Dr. Singer was appointed an Officer of the Order of Canada in 2011 for his contributions to health research and bioethics, and for his dedication to improving the health of people in developing countries. In 2007, Dr. Singer received the Michael Smith Prize as Canada's Health Researcher of the Year in Population Health and Health Services. He is a Fellow of the Royal Society of Canada, the Canadian Academy of Health Sciences, the U.S. Institute of Medicine of the National Academies, and The Academy of Sciences for the Developing World (TWAS).

Dr. Singer has published over 300 research articles, received over $50 million in research grants, and mentored hundreds of university students. He recently co-authored, along with Dr. Abdallah Daar, The Grandest Challenge: Taking Life-Saving Science from Lab to Village. He studied internal medicine at University of Toronto, medical ethics at University of Chicago, public health at Yale University, and management at Harvard Business School. He has served his community as Board Chair of Branksome Hall, an acclaimed and internationally-minded school for girls.


For a list of Dr. Singer’s publications, please visit PubMed or Scopus.