Immune Cells from the Gut a Threat? | UHN Research

Immune Cells from the Gut a Threat?

Home page Description:
New study finds that immune cells originating in the gut may promote disease in the joints. 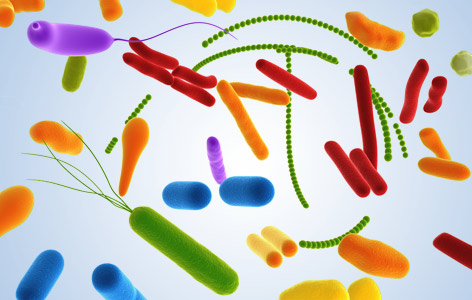 Image Caption:
MAIT cells form part of the body’s non-specific immune response, which responds to general threats such as bacteria (various types of bacteria illustrated above).
Ankylosing spondylitis (AS) is a form of arthritis that is characterized by painful swelling in the back and neck joints. While this swelling is the result of inflammation, which is mediated by the body’s own immune system, the underlying cause of the disease is unknown.

Because most patients with AS also have inflammation of the gut, it has been suggested that there is a link between immune cells in the gut and the development of AS.

To explore this link, Krembil Senior Scientist Dr. Robert Inman and Eric Gracey, a graduate student at the University of Toronto’s Department of Immunology, tested whether a type of immune cell that develops in the gut—known as a mucosal-associated invariant T (MAIT) cell—is involved in AS. MAIT cells develop in response to bacteria in the gut and can be found at low levels throughout the body. The researchers chose to study MAIT cells because they have been implicated in other chronic diseases such as rheumatoid arthritis and lupus.

The results showed that people with AS had fewer MAIT cells circulating in their blood than did healthy individuals; however, when looking at the fluid within joints, the researchers found higher levels of MAIT cells. This suggests that the cells might be recruited to sites of inflammation (ie, inflamed joints).

Detailed analyses of the MAIT cells from joints revealed that many of them were ‘activated’ in a state that could promote harmful inflammation. Dr. Inman explains, “These cells displayed proteins on their surface that are known to promote inflammation—and one of these, known as interleukin-17, has been implicated in AS.”

These results strengthen the possibility that immune cells originating in gut play a role in AS, while providing new molecular targets that could inform the development of new treatments.

This work was supported by the Canadian Institutes of Health Research, the Arthritis Research Center and the Toronto General & Western Hospital Foundation.